Zombies, PSYOP and You! 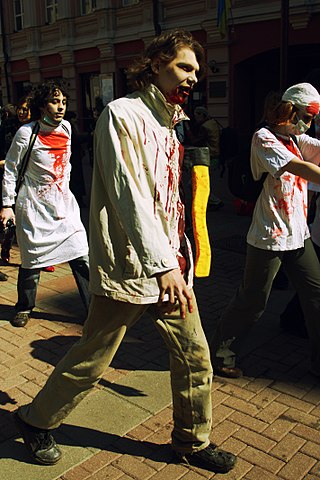 Zombies! The Haitian Ones, Right?

Zombies! No, I'm not talking about the Vodun/Voodoo variety Haitian zombies created by causing the victim to ingest tetrodotoxin (toad toxin), puffer fish poison and other substances which so depress vitals as to be indistinguishable, to all but high tech medical personnel, from death. The Death Certificate is issued by a physician. The victim, who happily or unhappily isn't embalmed, is then buried straightaway for a time, brain damaged by oxygen deprivation while entombed, dug up and thereafter worked as a slave by the creator or sold to someone else.  Readers interested in this disgusting exercise should read The Serpent and the Rainbow, by Wade Davis. Instead, I'm talking about what appears to be at least three things: a radical new defensive weapon, a mass mind manipulation using official channels and a potentially devastating destabilization means. In actuality, there are probably more. Not-for-attribution contacts agree the highly publicized zombie virus is more like an onion in true nature–layers and layers.

For some time now, there has been some very strange information coming out of government circles about a zombie virus and the need to prepare for an outbreak or outbreaks. Whether an announcement about the zombie virus from the CDC, a coverage-suppressed-by-FEMA online announcement of a zombie virus preparedness exercise in Moscow, Idaho, a full-scale drill in San Diego, California, or another one in Bangor, Maine, the coverage is all about zombies and the alleged zombie virus. The perceived main players are heavy hitters: DHS, FEMA, CDC, coupled with National Guard and all manner of local authorities and disaster-related organizations. That's the official line. The truth's far scarier. Unlike the putative zombies the government's getting us all worked up about, this is all too real. Here's what my highly sensitive sources tell me is what's really going on.

The nation's under attack! Enemy troops from (fill in blank), following a precipitous and ill-advised gutting of U.S. defense capabilities caused by (insert culprits here) are at the borders ready to invade. The President summons the National Security Advisor, the Chairman of the Joint Chiefs of Staff, the DCI (Director of Central Intelligence), the entire Cabinet and others, searching for a way, any way, to buy time for a crash mobilization to defend the country. The President is desperate with a “D” and is blown away when the demand for a “black program weapon, one of those super secret things you people never tell me about” produces a terrifying new weapon. That doesn't exist. When briefed, the President gasps, in a combination of shock, disbelief and almost palpable relief, coupled with acute concern. Will it really work?

Very publicly, the U.S. announces that unless the would-be invaders stand down and withdraw immediately, it will unleash horrific, but unspecified, super weapons against the foe. That's what's said officially. Unofficially, a series of deniable “leaks” happen, naturally, from “a high government source,” an “official who asked not to be identified” and similar.  Simultaneously, through any number of CIA-controlled media outlets and particularly high traffic websites and blogs, there is a rising chorus of discussion about the zombie virus, what it can do, and what that would mean if it broke out.

Social networking sites would be used to the max, and what appear to be hastily produced vids would be posted and go (can't resist) viral. The intention is to spread the memes, the conceptual bullets, if you will, that the zombie virus is real, the U.S. has it and will use it if pressed. And why would anyone, let alone hardbitten military leaders believe such a seemingly insane threat? Because the Americans have been preparing against a zombie attack for years! “Oh, sure,” say the intelligence officials, ” they officially deny it and cloak it under clever preparedness exercises and such, but we know better, don't we? After all, it's axiomatic that no nation spends money preparing against a weapon it doesn't already have, right? So, if the Americans have spent all that money and political capital for zombie defense, then they must have such a virus!” Faces go ashen in the room, hearts palpitate, hands shake.

The trouble with global connectivity is that information, especially the emotionally charged and graphic variety, once in the network, propagates at blinding speed and in such diverse forms that it's all but impossible to contain. Social networking alone might suffice, but whole new levels of credibility attach when the major networks start singing the government's song, when the disaster preparedness units stand in high profile readiness just behind the troops covering the border. Never mind the ubiquitous cell phones with their texting, VM, picture and video distribution capabilities.

Does anyone here believe that multiple U.S. agencies can't effortlessly break into any cell phone network desired and seed whatever information's desired and in myriad forms? The pre-emptive attack on the imminent invasion could be entirely of the digital “Wag the Dog” type, but it might well be far nastier. And history fully supports the scenario.

Let's say the multiple real reports of cannibalism (from eating bath salts, other psychoactive compounds and/or acute psychiatric problems) and the digital deception campaign, the PSYWAR (Psychological Warfare) strategem, aren't deemed enough. How far would the government go to sell the idea? Murder? No problem, even against civilians. Tuskeegee Experiment. Open-air atomic testing. Deliberate introduction of radioactivity into the environment generally and nasally specifically. And don't forget the awful chemtrails!

Would a government which systematically sprays its own populace with pathogens and toxic chemicals quail in the least at taking some homeless people and/or institutionalized mental patients, dosing them with, say, bath salts, PCP (temporary super strength), rabies and necrotizing fasciitis (flesh-eating bacteria) to “sell” the zombie virus story? The answer's both obvious and abhorrent!

Now, imagine you're a soldier in the army of would-be invaders. Everywhere you turn you hear or see something on the zombie virus. A chill of dread runs down your spine. So, what happens when you start hearing reports of zombie attacks on your fellow soldiers? Or you know someone whose face was gnawed off? A conventional foe is one thing, but this is the very stuff of nightmares, nightmares not covered in either the manuals or combat training. And the zombies are practically unkillable! And what if reports come in that whole formations have been subjected to some mysterious spray. Can anyone be trusted?

How much of this could any army withstand before first unraveling here and there, followed by outright disintegration? At best, the would-be attackers will be badly disrupted, but may be outright destroyed as a cohesive combat force. Either way, the zombie virus story, together with various horrific embellishments, buys the nation time to regroup and prepare a solid defense should an attack still materialize. That's how the zombie virus could be used as a biowarfare defensive weapon.

Once I became aware of the scope and scale of this whole zombie virus scenario, my suspicions were immediately raised. Bluntly, I smelled a rat. A very large smelly one at that. As a student of  history, I'm well aware of how an overt thing can be used to mask something covert. Be it U-2 sightings allowed to pass as UFO reports, chemtrails under guise of an artificial ozone layer, military exercises on a border as cover for an invasion, history shows the best manipulations occur, not through outright forcing a belief down the throats of the audience, but of so distorting perception that the unthinkable is seen as acceptable. So, too, here. The zombie virus, you see is a very effective mass mind manipulation.

Highly sensitive contacts confirmed what I'd already figured out. This was the CIA's baby. No surprise there. The Agency has a long and sordid history of dirty deeds, including, in the informed view of my contacts, the New Town Massacre and the Boston Marathon Bombing. These are destabilization operations aimed at unhinging our society, spreading distrust, fear and panic, in turn “justifying” even more draconian control measures against the American people. Of course, this would be “sold” as enhancing our security. Rather redefines the term “domestic terrorism,” doesn't it?

The CIA is not alone in conducting what insiders view as a huge effort to see how gullible the public is. No, for the word is U.S. Army Intelligence is in this hip deep. PSYOP (Psychological Operations) are supposed to be conducted against foreign enemies, but dare we believe this? History's not encouraging!

Zombie Virus–A PSYOP Weapon Against Us!

It's fair to say the U.S. is the most zombie aware place on the planet. Most of what might be termed the popular zombie culture originated here, and it expressed and expresses as film, TV shows, books, comic books, board games, computer games (stack of FPS–First Person Shooters in particular),T-shirts, masks, costumes and more. Therefore, when the news starts reporting official zombie virus preparedness exercises, faces eaten off in broad daylight before horrified onlookers, disturbing reports of corpses reanimating (covert U.S. biowarfare field trial?), plenty in the public take notice, and a frisson of fear immediately occurs.

People in fear can be made to do all sorts of self-destructive things, and I don't merely mean allowing themselves to be enslaved. If you want to tear the country apart, simply “leak” that some group has had outbreaks of the zombie virus, which will a) cause pandemonium and b) unleash who knows what mayhem and murder on the mortal threat of  the”zombie virus infected.” But for real excitement, make the same claim regarding other groups, but keep this activity of zombie virus rumor spreading small and scattered. Human nature will do the rest. Inhumanly!

This is how an ostensible defensive PSYOP weapon can all to easily become an offensive PYSOP weapon against us. Every one of you needs to be extremely wary of any and all reports of a supposed zombie virus outbreak, lest the fear of zombies become a stampede to our own annihilation–at our own hands!

SAw the announcement and immediately had my hackles go up.

Tetro blackberry phones are the phones used secretly encrypted for Epstein Island and Biden’s island is only 10 minutes away from Epstein’s. Wonder if they used Tetrodotoxin on the kids to keep them embalmed during shipments from old sub bases apparently purchases.

Was utterly unable to find not just a Tetro Blackberry, but a Tetro any kind of cell phone. If you have a link, I’d love to see it. As for tetrodotoxin, it doesn’t embalm. It is a paralytic which can reduce bioactivity to the point that only the most astute doctor can tell the examined person is alive.