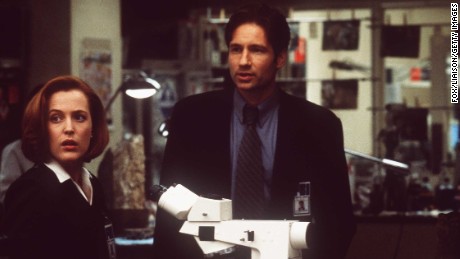 The X-Files blew me away, sucked me into a swirling chaos of UFOs, ETs/EDs, hidden history, covert ops, betrayal, sellout of the human race, genocide, mind control and loads of other stuff. The review immediately following appears to indicate the brief return of “X-Files” to TV didn't begin well. And since the 6-part series run is over, this is essentially TV history–unless someone who didn't see it wants the DVDs.

We can debate endlessly whether it was even a good idea to bring back The X-Files from the dustbin of popular culture after years of being revered as a thing that once was great, just as we can argue that Fox should have sent more than one (of the six) episodes to critics to get an accurate reflection of what this special revamp is all about.

But The X-Files is indeed back and we did indeed get only get one. There's no getting around that.

Or this: It's not very good.

Given that the second episode airs one night later (Monday, 8 p.m.) and wasn't sent, that's not a good sign.

Now, there's still hope left in the room that the five episodes to follow will be good, just like there's hope somewhere out there that Twin Peaks also won't be bad when Showtime revisits it. But given there's only this hour to go on, let's get started with the alien autopsy.

That's what this is really. The X-Files as people once knew it seems quite alien to 2016 television. We've all seen a lot since Chris Carter's quirky little series first appeared on television. People are more familiar with the concept of backstory “mythology,” and all kinds of science fiction and paranormal series have come and gone in the years since, not to mention several separate series with stars David Duchovny and Gillian Anderson.

Why the need to revisit this show now (and only give six episodes when the series famously couldn't explain its larger mysteries in hundreds of episodes)? Nostalgia? A fall schedule for Fox that has paranormal elements to it and so it fell into the Network's theme? Who knows.

What we're left with is a very underwhelming hour that will force even diehard fans (and yes, I was one of them) to consider whether pushing onward is really worth the time. Ah, time. Maybe it's dulled the memory a bit, but was Duchovny, famously laconic anyway, always this sedated? Anderson seems equally placid and unhurried on her part, which makes the whole affair seem (as it did when a sneak preview was shown to critics in the summer) slightly off. Out of context in the summer, the clip seemed like a spoof. A large portion of the room was laughing because we thought that's what it was. Turns out, no, but at least in context there's less wince-inducing hilarity to the first episode. And yet, nearly every scene seems stunted and out of any kind of dramatic rhythm.

The updated X-Files begins ominously (not intentionally) with a very long voiceover from Duchovny as Fox Mulder, trying to catch up the audience on the history of the show and the fictional X-Files, where paranormal cases were handled at the FBI. It's a labored but necessary bit to get everyone current, but it can't shake the stagey feel of the writing, a red flag that indeed hints at future narrative abuses.

Carter wrote and directed this first episode and there are some fans in The X-Files camp who prefer the work of Glen Morgan and James Wong, who each wrote an episode and Darin Morgan, who also wrote one (Carter wrote three). So, if you're thinking positively, maybe things get better.

Joel McHale breathes some life into events as Tad O'Malley, a kind of political-conspiracy blowhard on TV who convinces (not too convincingly, by the way) Mulder to come out from self-imposed exile. With a little prodding from Walter Skinner (Mitch Pileggi), Dana Scully (Anderson) join's him, getting the whole gang back together. It all seems a little too convenient and met with little resistance, but hey, there's only six episodes. Anyway, Mulder gets alien fever again and he believes there's a giant government conspiracy at hand. Scully being Scully, she resists before coming to believe, which is basically a rerun of roughly 200 prior episodes.

The problem with reopening The X-Files is two fold. First, the actors, not their characters, don't seem to have their hearts in it. (That probably wasn't the intention, but it's the perceived result.) And, second, Carter's dialogue is prone to exposition (again, partly the result of only having six episodes to work with) and overheated soliloquies. How that combination sucks the life out of this whole enterprise can't be underscored enough.

After more than a few heavy-handed scenes that would otherwise seem like parody, there's a moment in the first hour when after an “oh-don't-do-that” rant by Mulder about what's really happening under their noses Scully says something that serves as both descriptor and indictment of revisiting the series: “It's fear-mongering, clap-trap, isolationist, techno-paranoia so bogus and dangerous and stupid that it borders on treason.”

Yes, what she said.

Maybe treason can be averted if the five episodes after this will improve greatly. Maybe those five will reinvigorate the characters and the concept (and the actors). But maybe sometimes its better to leave things alone, to let them be about their time and place. Unearthing them for further exploration just proves you can't go back again, you can't recreate the original magic and you run the risk of raising the question of whether things were so magical in the first place.

See the original story at The Hollywood Reporter's website.