Battling Giants? Not the US Military's First Rodeo!

According to informed high level sources in the Liberation Forces–positively aligned ETs/EDs (Extraterrestrials/ Extradimensionals)–here to free Earth and her people, as well as a Member of Ground Contingents (Terrans with a direct familial connection to the Liberation Forces), on March 1, 2021 a US Marine Corps force of some 300 Marines which was exploring sprawling underground caves some five levels below the White House to see where they went, who might be down there, what was going on and why, had an unexpected and massively lethal encounter with about 50 somewhat Reptilian looking: bipedal, long tail; don't have pointy reptile type heads or fins on back) giants 100 feet tall, reportedly called Maldekians.  The Marines were not in full war array, so had no direct fire weapons more powerful than their M4 carbines.

Sources say the Marines, waylaid from a side branch, suffered some 250 KIA–out of 300 that went into the caverns! Was told there were no wounded. Security classifications aside, the  only way to hide such losses from the bereaved families, Congress, POTUS and the public alike is to lie! What were very much combat deaths will be reclassified as accidents, and there are myriad ways to die from one in the military. Would expect not only lots of closed coffins, but also some being reported lost at sea and, in any event, for all those fatalities to be spread out over time to avoid a telltale damning casualty spike.

On the face of it, the story seems utterly preposterous, but what if I told you the US military has already fought giants? Would that change your views? Those giants fighting US Army Special Forces (aka Green Berets)  were in the 14-18′ height range and had enormous resistance to 5.56 mm M4 carbine fire, meanwhile picking up Green Berets, flinging them about, tearing them apart and devouring them! Should tell you also that a Bigfoot has been observed to rip an entire haunch clean off a huge male elk it brained with a big thrown rock. Have seen the photo. This should help you understand  the kinds of horrendous injuries powerful beings can cause. Apparently, these beings which attacked the Marines are carnivores. Sources say their sharp teeth are about half the length of a leopard's fangs,  and these Maldekians have hands with sharp somethings intermediate to fingernails and claws.  And what is the preferred food of these giants? Children! Having the Marines down there in the caves interfered with food delivery, so the hungry giants attacked.

This wasn't the end of combat, just the trigger, for the few survivors retreated, and another 300 Marines were sent in, this time in full combat kit, including support weapons suitable for use underground. The Member of Ground Contingents described the winning weapon as a bazooka, shots from which were supposedly used to blow the heads off the Maldekians, but am not at all sure one these would be the thing to use to get a head shot, especially since you get only one chance, after which it's time to get another AT4.

Am therefore of the opinion that the far more likely candidate would be the Mark 14 Mod 0 40 mm Multiple Grenade Launcher, the latest version of the USMC M32A1. It can be used for both direct and indirect fire, has sophisticated sights and is handy even in confined spaces.

Would now like to show you why I think this grenade launcher could blow the heads off the being that attacked them. Here is Robert Wadlow, the tallest man whose stats were all medically verified. He was 9 feet tall in round numbers. If, their heads are even close to our own in terms of being proportioned to their bodies, can you imagine how big a target the head on a Maldekian over 10 x larger than him would be?! Nor would it be necessary to go for the headshot, since aiming a few inches below where the neck meets the shoulders would almost certainly do the same thing. The normal grenade combines blast and pre-scored frags to create lethal damage to humans to a radius of ~16 feet. What do you suppose a direct hit would do? There's a round called HEDP (High Explosive Dual Purpose which, depending on the target, either goes off like a grenade or can punch through ~2 inches of steel armor plate if it hits something hard, like a skull! 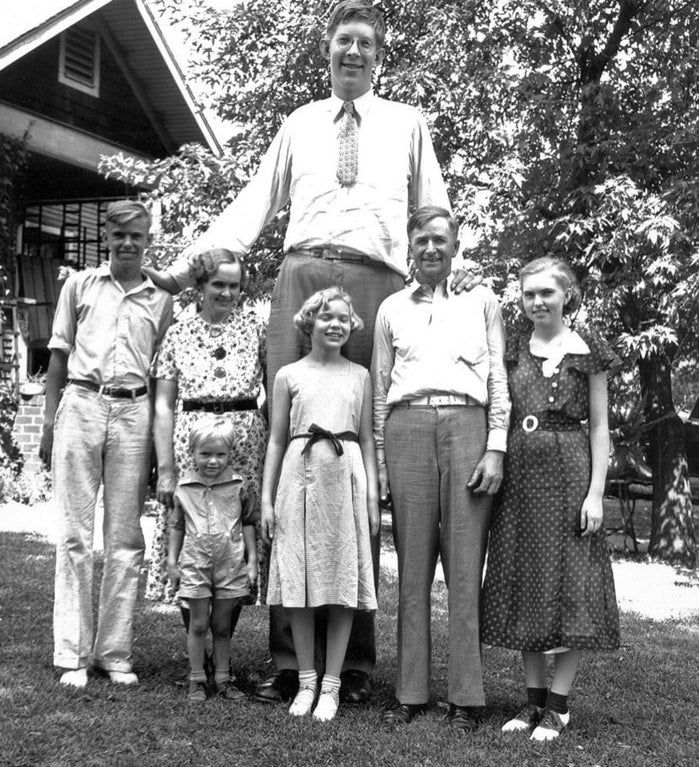 The Fighting Continues–As Part Of a Vastly Greater Campaign

Regardless, what we do know is that the Marines have throughly identified the locations of all passageways like the one where the attack took place and have well-armed groups covering each one. Sources say there's a kind of standoff, one in which the creatures don't want to be killed but are driven by hunger to come out of their lairs to feed, so there's clash after clash taking place, and the Marines have cut these creatures off from their food supplies–kids! In their ongoing fight,  the Marines are being aided by 4th Dimension leopards, whose hyper vigilance lets the exhausted Marines get some much needed rest. And all this Out There stuff is occurring amid apparently massive ongoing operations already being conducted underground to destroy Deep State complexes and recover stolen children, children otherwise destined for slavery, use as sex toys, rape , torture and murder victims, not to mention, transplant parts, food and Adrenochrome for demon-worshipping globalist elites. As Q (the high level US Military Intelligence group trying to save the nation through Information Warfare to avoid a full-blown civil war)  has said many times of these monsters: “These people are SICK. These people are EVIL.”