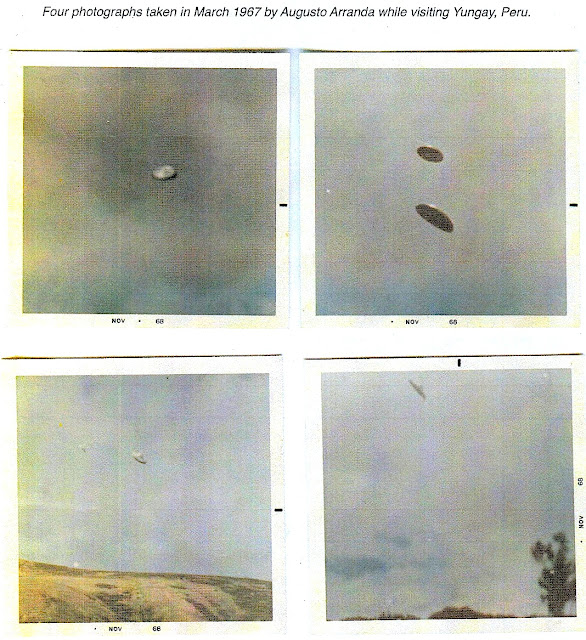 UFOs, more specifically, certain military related activities by their occupants in our history of warfare here, formed the subject of Part 1.    In that post, after explaining what Janissaries were, I noted a remarkable congruence between the core scenario in SF writer Jerry Pournelle's Janissaries and what MJ-12 (the controllers and lethal guardians of the secrets of UFOs) had to say on the matter in a document I believe for a number of reasons to be real. The central premise, described here, is that aliens aka (per my usage, ETs/EDs–Extraterrestrials/ Extradimensionals) in UFOs are taking whole small military units from Earth, carrying them off to a faraway planet not in our solar system and using them as tailored forces to wage proxy wars.

What it boils down to is this: MJ-12's own putative highly classified internal document shows multiple instances of military units (over a period of centuries, I forgot to note before) simply vanishing, complete not just with their weapons and what's on their persons, but even entire encampments with nothing left but the tents!  Worse, the last set of instances strikes altogether too close to home–whole small units of US troops apparently taken a bunch of times during the War in the Pacific, during WW II which ended a mere 71 years ago. These matters were addressed in Part 2. Part 3 will address UFOs and the disappearance of the famous Flight 19 on December 5, 1945 in the now infamous Bermuda Triangle.

The disappearance of Flight 19, a peacetime navigation and low-level bombing training flight consisting of five huge single engine Grumman designed, but built by General Motors,  TBM Avengers (crew of 3 each, but one plane was a man short), together with a Martin PBM-5 Mariner flying boat (crew of 13) sent out to find the missing Avengers and their crews, triggered the largest air-sea rescue effort ever seen. It involved hundreds of aircraft, many ships, and saw the scouring of some 200,000 square miles of ocean alone. With no plane wreckage or bodies, the original Naval Board of Inquiry still tried to pin it on the flight leader, Lt. Charles C. Taylor, but had to back down and change it to “cause unknown” after his mother  pointed out the injustice of such unsubstantiated condemnation.

I shall now resume the discussion, first including what I said in Part 2 about the source material. Before I do so, I believe it is both fair and important to point out the previous videos (the one from Open Mind and used because there weren't many options) fundamental gross misrepresentation and cavalier dismissal of the work of nuclear physicist (multiple black project experience) and UFO investigator Stanton T Friedman, MSc. regarding figuring out the believability of the people named in the document. He spent years meticulously investigating the men: who they were, what they did, their educations, their overt (and sometimes covert) government service, personal connections, clearances; where they were at the time of the Roswell crash notification, who they were seeing, any communications, supporting evidence, etc. He worked the archives like a virtuoso, spoke to people who had known these men and, in some cases, interviewed their widows! It was Stanton Friedman who thoroughly explained why notorious UFO debunker Harvard astronomer Dr. Donald Menzel was listed. Turns out he was a cryptographic expert, held the highest clearances during WW II (continued to have them after it), and was a disinformation expert! Anyone interested in the in-depth research he did into these first MJ-12 members and what he learned needs to read his rigorously researched but quite readable TOP SECRET/MAJIC.

UFOs Carrying Off Military Units: MJ-12's Records on the Matter

This discussion is now going to place me, I am sure, in a way I haven't been for quite some time, squarely in some very powerful people's sights. Therefore, I am going to be exceedingly judicious in what I say and how I say it.  Much more is at stake here, you see, than my hide! Consequently, since I'm well aware of the little traps put into highly classified documents to show where a leak originated, things like deliberate spelling, capitalization and punctuation errors, I am not going to provide the information verbatim. Instead, I'm going to recast it. What I saw was for an Annex “C' and was page 13 from same. I believe this to be from a September 1948 year-end report of The President's Special Panel to Investigate the Capture of Unidentified Planform Space Vehicles by U.S. Armed Forces and Agencies. To be clear, “planform” is not a typo. It means configuration or shape when viewed from above. What I was shown had some sort (hard to say exactly, given extent of cross out) of TOP SECRET markings at the top and bottom. There were no paragraph markings, which were mandatory for every classified document I handled during my over eleven years of doing classified military analysis at Hughes Aircraft Missile Systems Group (now Raytheon) and Rockwell International, North American Aerospace Operations (now Boeing).

UFOs, MJ-12 and the Disappearance of Flight 19

Referring to Annex “C” for what appears to be September 1948 year-end report of The President's Special Panel to Investigate the Capture of Unidentified Planform Space Vehicles by U.S. Armed Forces and Agencies, what does MJ-12 have to offer on the subject of Flight 19?

C 3 provides a rather disturbing answer.

“Missing aircraft, pilots and crews are of special concern when no explanations fit the usual reasons outside of combat”

And how! The entry then goes on to specifically single out the disappearance of Flight 19 (using a generic characterization, “five U.S. Navy TBM-3”), while signally failing to mention the PBM-5 Mariner and crew, perhaps for lack of an overheard radio transmission. It states there is “no explanation why navigation instruments on all five aircraft could have failed…it is believed that  Flight 19 encountered a phenomenon of celestial nature.”

This case, detailed in the video, is one of the most famous and well documented of UFO cases. The craft was seen on the ground and from the sky. It was detected and tracked radar from the ground and the air, but what concerns us here is what the craft did to the radar and other instruments when the two successive armed Iranian F-4 Phantom II fighters, following orders, attempted to investigate an unidentified brightly glowing object (visible from 70 miles away!) which was reported being as big as a Boeing 707 airliner.

The Iranian fighters, taken in aggregate, not only lost sensors, but navigation instruments, radios and weapon controls when close to the UFO. The second pilot was so frightened he tried to eject, but that didn't work, either. As soon as the pilots got some distance away, things returned to normal. UFO literature is full similar occurrences with cars and trucks, being immortalized in a scene from the moving (my friends and I wept during the last segment) blockbuster “Close Encounters of the Third Kind.” In the early to mid 1950s, the Air Force waged war against the UFOs, losing ~200 aircraft and who knows how many air crew as a result! Other sources claim a vastly higher number, some of which are doubtless not because of UFOs but the problems inherent in fielding hugely advanced, complex and very fragile jet aircraft–in aviation which had known little but props since the early 1900s. This radical change essentially involved flight crews (and lots and lots of other people) getting used to a new reality. Indeed, for a time the Air Force feared pilots wouldn't be able to do their jobs at such blistering speeds. Too much to do and too little time in which to do them!

The idea here is to show that UFOs are perfectly capable of temporarily disabling electrical or electronic devices seemingly at will. That's a recoverable soft kill defensive mode. Plenty of planes which sought to engage and destroy UFOs have either been destroyed or have simply vanished without a trace. See any Flight 19 relevance now? I sure do. Recall, too, that the document I referenced, if actually an MJ-12 document, and it sure reads like one, does NOT cover the terrible losses in the 1950s, for it was a 1948 report! Nor have I covered the other losses it does address. For those, you'll need to read Part 4.

Hello John
Hope all is well…this repeating time line we all are/have experienced has come to an end…try to think back when your life was turned upside down, concentrate on your new path or course correction, a do over as some may say…choose that once overlooked trail. We are all travelers…
Be well my friend

Funny you should bring up what you did, because for weeks on end now I’ve been involved in grueling, brutal, deeply painful work to get back to the point untold eons ago when I was first formed and fix the initial events which led to my current horrific plight, only to be destroyed over and over and over again then, but manifesting here as all sorts of bodily and life havoc. Went through one of those drills tonight, and it absolutely wasn’t fun. Thank you for your kind words, and be well thineself.