Recently, a new guy, Q, moved in here, and proceeded to astound me by talking about Columbus's not having discovered America and other things very much along the lines of secret societies, the esoteric, historical conspiracies and more. Naturally, this led to my telling him about the Templars in America and the Stephen Sora book on that called The Lost Colony. Next thing you know, he walked into his room and came back with a battered hardback copy of Dan Brown's bestselling The Lost Symbol. Brown is the world famous author of The Da Vinci Code, among others. He handed it to me, saying I'd enjoy it. He was right about that, but he had no idea what else would occur while and after I read the book. Nor did I!

Secret Societies & My Unexpected Trip Down Memory Lane, Not to Mention New Realms

There was a lot of upheaval going on, so it was some time before I could get going on the book, but when I did, I read like a man possessed and lost a great deal of sleep in several marathon bouts because I simply had to keep reading . Should point out that being able to sit down and read like that is something altogether too rare for me, so to be able to devour The Lost Symbol the way I did was pretty much amazing in and of itself.  The book led me  down a rabbit hole–crafted by Masons! Indeed, the Masons and Freemasonry were major aspects of the book, and the action took place in that hotbed of Freemasonry known as Washington, DC, a city designed by a Mason! Karl and I were there in the mid 1990s and toured many of the key locations in the book. Some of what we saw left us jaws dropped and stunned, while other things fascinated and a number were deeply disturbing.

Our Detour to a Historic Crime Scene

It was on this same trip that we walked the park ground where Clinton insider Vince Foster's murdered body was found and unambiguously concluded the story being peddled was a complete lie, for the terrain in no way matched what the public was being told, rendering impossible the account being palmed off on clueless American TV viewers and radio audiences. We were subsequently interviewed, after getting back to California, about our Vince Foster crime scene discoveries (and other matters) by controversial independent documentary maker Anthony Hilder on his radio show.

Back to Secret Societies

The Lost Symbol takes place in a number of famous Washington, DC locations, but two stood out in particular. In one, there is a reference to the full scale dazzling Ark of the Covenant at the George Washington Masonic National Memorial. Karl and I have been there. For us, who have schooling in the occult and other matters, it was downright creepy and strange. Readers should understand that George Washington was a Mason himself, but we were under the impression, from various things we'd read, that he got out early, but if the book excerpt from America's Secret Destiny by Robert Hieronymous is to be believed, Washington was in Freemasonry from 1752 and rose to high and esteemed levels within the Craft; that it was a key part of his belief and actions during and after the American Revolution, in which most of his generals and the renowned foreigners Marquis de Lafayette and General Friedrich von Steuben were also Masons. That's one side.

On the other side stand some direct statements by Washington himself in letters and drafts of letters written about his own views on and awareness of Freemasonry. Washington was particularly concerned with the contamination of the Masonic Lodges by the evil influences of Illuminism. For a fuller explanation of what that Illuminism meant to him, please see this excellent piece. In any event, Karl and I were rocked by encountering an enormous statue of George Washington in the lobby of the sprawling structure. Based on what we saw, our impression was that the Masons had effectively appropriated George Washington, just as the positioning of the George Washington Masonic National Memorial, atop the city dominating Shooter's Hill, occultically captured and controlled the city itself.

Something else which struck me in The Lost Symbol–like a lightning bolt from Zeus–was Constantino Brumidi's gigantic (4600+ square feet) fresco The Apotheosis of George Washington, which fills the Eye of the Rotunda of the Capitol. I hope Karl forgives me for the bandwidth hit, but I simply have to show this fresco depicting the ascension of that great man from mortal to god. In his time, well-intentioned people tried to make victorious Washington king, so to see him turned into a god was effectively incomprehensible to us, but we knew in an instant what we were seeing. Admittedly, this overwhelmed our ability to process the wealth of what else was there. Here is the official full description, with links to view each incredible section. 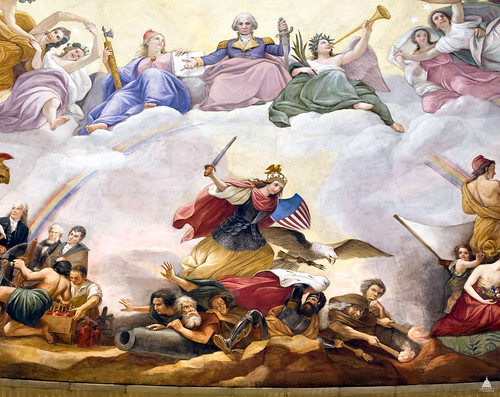 Given the above, in a matter of a few weeks, I had been immersed in no fewer than three secret societies: the Knights Templar, the Freemasons and the Illuminati. Speaking of the last, I had my own flash of revelation while reading the book–an instant of complete knowingness of what was being described by the author, but not directly revealed until near the end of the book. What was it? That would be telling!

But we are at the end of this post, and before I close, I should tell you there was one more encounter with secret societies by me. Here's how. Every month I trek down to the pharmacy to get my meds, and when I went through checkout fairly late in the month I espied the brilliant yellow frame of National Geographic, a periodical I hadn't read in ages. And what should be staring unblinkingly at me from the cover which, so help me, bore the title Secret Societies: True Tales of Covert Cults and Organizations and Their Leaders? The self same All Seeing Eye (the Mystic Eye) most commonly found on the back of every US one dollar bill! This one was from unspecified ancient stone carving, I believe.

This weird serendipity; this strange experience, mind, was the day after I finished reading The Lost Symbol. And the icing on this practically shattering manifestation of information finding me was? It wasn't a regular issue of the magazine, but was instead a single topic special edition, covering in spectacularly illustrated, mapped and chronicled Nat Geo Fashion no fewer than 29 secret societies. From a numerology perspective, that's 2 + 9 = 11, and 11 is a big deal to occultists and mystics. Other than that, the play was fine.

In closing, you should know that Dan Brown is not a Mason, though he has been invited to join. For his sake, let's hope he doesn't join an organization whose much revered “pope,” one Albert Pike, former Confederate General and co-founder of the KKK, flatly says lies to its recruits and in all but the top degrees, to whom the Great Secret is revealed–God is Lucifer! If you don't believe me, find Pike's Morals and Dogma, preferably in an early edition before the Masons realized their cover was blown in around 1990. The one I skimmed was from 1906. Shall leave you to contemplate the searing reality that the Shriners in their conical (okay frustrum like) hats (fezzes)  and little cars are 33rd Degree Masons, the top of the Masonic heap. They know exactly what they're doing and for whom. They are the polar opposite of harm

In reading this post again, I noticed something went badly awry and wasn't caught by me. The error flatly reversed my intended message! See for yourself.

They are the polar opposite of harm

They are the polar opposite of harmless!

I apologize for any confusion or upset my gaffe may've caused!