Note. All submarine images in the above video are of US Navy subs. The K-129 looked like this. 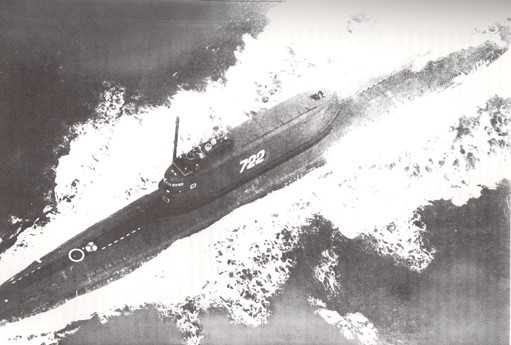 Soviet ballistic missile submarine K-129. Missile doors on top of the conning tower and aft of the number. Image Credt: US Navy via Wikimedia Commons.

“Nuking Hawaii? Are you nuts?” You might think so, but you may not after reading this post. Here, the truth is stranger than fiction and terrifying.

The first would've come from the K-129, a diesel-electric GOLF II-class Soviet ballistic missile sub gone rogue and attempting to launch on March 7, 1968. This was likely as a result of a specially trained KGB  commando (osnaz) unit's having taken over the sub (13 men mysteriously came aboard just before sailing, making the sub insanely crowded). The K-129 tried to fire and almost succeeded in lofting a SS-N-5/R-21 SERB SLBM (Submarine Launched Ballistic Missile) targeted directly on the sprawling and vital US naval base Peal Harbor on the island of Oahu in Hawaii. The 1 MT (Megaton) unitary warhead would not only have devastated the entire Pearl Harbor complex, but demolished next door Honolulu as well. Total prompt civilian and military casualties would've been in the 500,000 range, with many more to come from direct and indirect radiation effects.

Not only would the destruction of Pearl Harbor have been a Grade One military disaster, during the Vietnam War, no less,  from loss of ships, repair facilities, munitions, fuel storage, spare parts and more but the loss of highly trained personnel and wholesale destruction of senior commanders, their staffs and communication systems would have multiplied the effects of this “bolt out of the blue” attack and made it exponentially worse. Why bolt out of the blue? It would've come at a time of normal conditions vs. the Soviet Union. Thus there was nothing to qualify as I&W (Indications & Warning): no sudden relocation of key personnel to outlying areas, no unusual aircraft activity or sudden major ship or sub departures, either. Nor would communication channels show increased radio traffic betokening military operations associated with war. In short, there were no war indicators, hence, no alerted US military posture.

The attempted nuking of Hawaii was made while surfaced 400 miles away (matching the range of China's GOLF I, armed with the SS-N-4 SARK/R-13 and the requirement it had to launch from the surface only), vs the 850 mile range, submerged-launch capabilities of the GOLF II class. Range numbers vary slightly but are of no consequence here. All that matters is that the K-129 was within range of Pearl Harbor with its missiles. No attacker would give up such a factor of 2+ range advantage or submerged launch, if available, so this was strong evidence that the K-129 was trying to present itself to the US surveillance systems as being Chinese.

The intention of what had to be Party Ideologist Mikhail Suslov and his handpicked head of the KGB Yuri Andropov (two of three legs of the Soviet government, the other being Communist Party Secretary Leonid Brezhnev) was to cripple the US, frame China (which Suslov hated) for it, thus getting the US to destroy China as a threat to the Soviets and enable the seizure of resource rich vast territories there, precisely at a time when the Chinese were becoming a serious nuclear menace and border clashes were so severe half of the Red Army was manning the border with China.

In fact, things got so bad a Soviet Army (a group of divisions) commander, with Chinese troops swarming his positions, violated orders requiring direct authorization from Moscow and employed surprise strikes from the then TOP SECRET BM-21 Grad (Hail) multiple rocket system, devastating the hordes of Chinese troops and sending them fleeing in shock and terror. Helping with the planned frame job was that the Soviets used China-supplied fissile material, and such material has its own distinct trace elements, which serve as a kind of origin tag.

Happily, and apparently thanks to covert transfer to the Soviets of US devices for precluding unauthorized launches, the last such device to stop that launch from the K-129 worked, causing the nuclear warhead to deflagrate (explode, but not at full strength), bringing propellant and oxidizer tank contents together near instantly, triggering a mighty explosion which wiped out the occupants of the control tower (what we call the conning tower), to which the missile tube installation was faired.

The obliteration of the missile in Number One tube then penetrated part of the Number Two tube wall, causing the booster section of the missile in that launch tube to go off low order because of blast penetration from the explosion in Tube One, bursting open the missile tube door, popping out the unarmed warhead (missile launch was not attempted)  onto the seabed floor and somehow leaving the missile in Number Three still in the tube. The missile explosion in Number One tube simultaneously blew out the bottom of K-129 below the exploded missile tube, sending the ripped open sub plummeting to the bottom at freeway speeds, breaking her up into a bunch of sections on impact.

K-129 is the very sub which the Hughes-built Glomar Explorer was designed to covertly retrieve while ostensibly harvesting manganese nodules from the seabed. Don't know what happened to them, but Dad met someone who gave him a manganese nodule mounted on a simple wooden block, together with separate his berthing card, from when he was a crewman aboard the Glomar Explorer. Contrary to CIA disinformation, the US didn't attempt to bring up the sub intact, only to have a big part of it break off. It brought up specific sections of intelligence interest.

The grand prize would've been the section with the still in tube missile of Number Three, a portion of the sub also holding the radio room and cryptographic gear, with the added bonus of that loose warhead close to the wreck on the seabed. A macabre discovery, an identifiable human face seen in one of the photos taken before the Glomar Explorer arrived led to a further bonanza, in the form of manuals, documents and personal papers, all preserved because the sea bottom there was so cold.  The third item of interest would've been a torpedo room, because it housed at least one of two nuclear armed torpedoes, each capable of destroying a carrier group or wrecking a harbor. Used in an antisubmarine role, such a torpedo could also annihilate an imprecisely located enemy sub, while simultaneously creating a prolonged effect called “blue out.” Blue out makes sonar, both passive and active, unusable for hours as the ocean reverberates. Also there would've been the active (pinging) and passive (listening) sonar gear. The Navy knew ours was much better, but it's always good to know the precise capabilities of enemy hardware. This is not just for the sake of knowledge, but because sometimes because it led to discovering vulnerabilities which would translate into tactics and procedures for better combat effectiveness.

The phenomenal Red Star Rogue by Kenneth Sewell and Clint Richmond lays out the astounding and terrifying story of what the evidence shows really happened with K-129. Even to someone with 11+ years as a professional military intelligence analyst, this book is a dazzling demonstration of what extensive research and “Deep Throat” type sources on both the US and former Soviet side enabled in terms of one critical revelation after another, under conditions where neither side wanted the truth to emerge. People risked their very lives in some cases to reveal the systematically buried for decades dreadful truth.

The second attempt at nuking Hawaii was from a much scarier, vastly more capable and dangerous deep black naval squadron operated by the CIA, in the form of a “boomer” or SSBN (nuclear-powered strategic ballistic missile submarine). The existence of this off-the-books CIA navy and more was first revealed by war hero Senator Daniel Inouye of Hawaii. The video is at that first link in this paragraph.

In turn, that naval force is part of a much larger  CIA entity called the “DARK FLEET” by those in the know. It is one of several deep black space forces operated by various military, paramilitary and commercial US and multinational entities. The DARK FLEET is a tool of the #DeepState globalists, who are now infesting other worlds, too, apparently, other star systems!

Now, it's hard enough to grok, still less accept, the CIA has more firepower (including nuclear) at its disposal that many countries combined, but as the second link makes clear, it operates its own space force and has for some time, in support of an agenda which, among other things, involves selling humans as slaves and food in exchange for advanced technology. For more information, please see Dr. Michael Salla's bombshell Insiders Reveal Secret Space Programs & Extraterrestrial Alliances (Volume 1) as well as his site, exopolitics.org.

The black budget, only 40% of which is appropriated (per proven spook sources), funds all this and oh so much more via drug trafficking, human trafficking, prostitution, gun running, large scale financial fraud, insider trading, kidnapping, extortion, murder for hire and piles of other crimes,  And while people prat on about returning to the Moon and colonizing Mars, humanity has already gone to the stars. Unfortunately, much of that humanity isn't the best of us but more like the worst! Meanwhile, here we sit on our little blue marble debating the existence of UFOs. How stupid we must look to humans and those not from here alike, whether termed aliens, EBE's (Extraterrestrial Biological Entities) or ETs/EDs (Extraterrestrials/ Extradimensionals).

Consider these last few paragraphs to be the tease for a horrifying story you'll never forget. Had it happened, most of us would be dead or soon die, followed by life here on Earth as a result of nuclear winter, the inevitable result of the large scale nuclear exchanges sure to result had the new patsy, North Korea, been successfully framed for the strike.