Are Satanists Running the Democratic Party? What Evidence Exists?

No political rhetoric here, but a damn serious question. Are Satanists now in control of the Democratic Party and not being at all shy in showing it? Consider:

VICE News, in a now removed undercover video, exposed two top Planned Parenthood executives openly saying to what they thought was someone from a firm that dealt in human transplant parts that not only could they supply any desired part or parts, but that they could provide tailored abortions in which the abortion was specifically done to preserve the desired parts. Subsequently, now fewer than six Planned Parenthood executives all swore it was selling baby parts (a federal crime). And if you think that's bad, it gets far worse–vivisection–in the uterus or after somehow surviving abortion and out of the womb! Did the Democrats denounce Planned Parenthood and try to defund it? No.  Instead, the official 2020 Democratic Party Platform endorses abortion clear up to birth. Some support it even after birth. And who was responsible for the legal action that forced the pulling of the video as a consequence of prosecution she mounted as California State Attorney General? Then and currently still pro-abortion Kamala Harris, the Dems' VP candidate, Joe Biden's running mate. As California's attorney general, she received major donations from Planned Parenthood.

Reworked (no God) Pledge of Allegiance at Democratic National Convention

This caused a lot of controversy when two videos were posted showing the customary (since 1954) phrase “under God” was conspicuously absent from several Democrat delegate meetings. The explanation given was it it was offensive to various groups, but was something more going on? Would argue yes and that we need to look at the big picture when we consider the meaning and import of all the elements when taken as a whole.

The Barely Hidden Satanic Pentagram in the DNC Logo?

Was practically kicking myself when I saw this exposed on Facebook, and no, I never heard of Pastor Locke in connection with this.

Here's Locke's rotation and interpretation. When I saw this, I felt as though I'd been somehow clubbed awake. Rotating the apparent future pointing arrow, so that it points down (hmm), changes things drastically. Unsurprisingly, this interpretation not only generated a huge backlash, but a denial from the graphic designer and informing the pastor that there really was a secret message embedded in the logo and wasn't Satanic. What, then?

A public barb aimed straight at Pastor Locke and hidden as the period on the “I” in “Democratic” in the Milwaukee convention logo. It was an admonishment to pay his child support! To be fair, the Republicans have, since 2000, had their own overtly Satanic logo issue, in the form of point up stars being inverted–right when the Satanic multi-generational Skull and Bones Bush family regained power! If these assessments are correct, then it appears these may provide evidences of the black magick (the real deal, not stage magic) technique known as reversal magick. 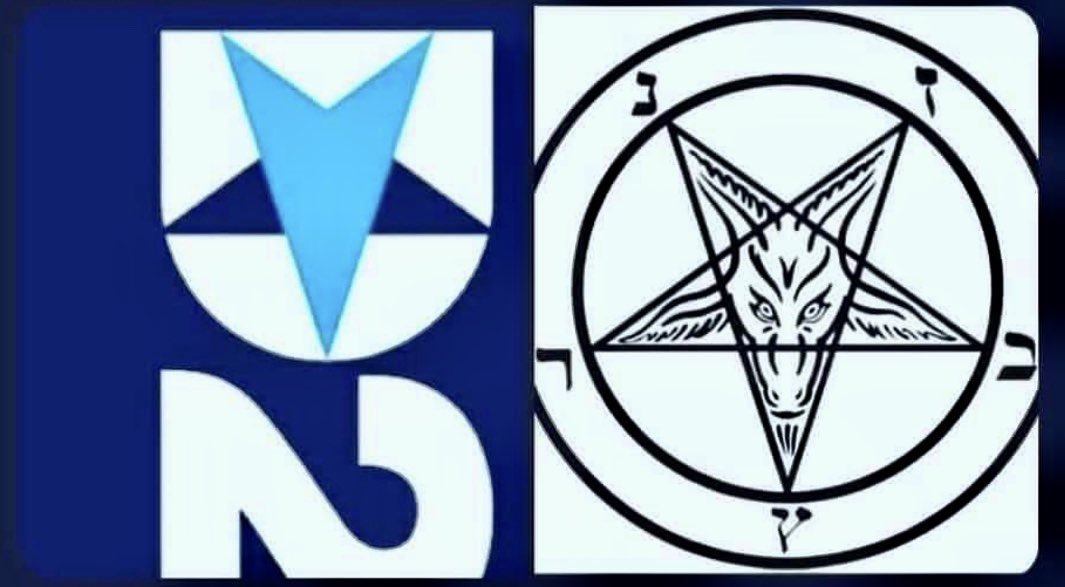 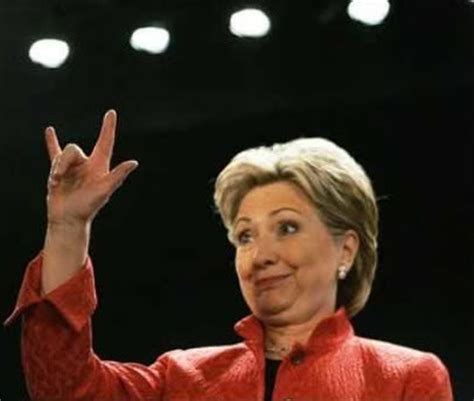 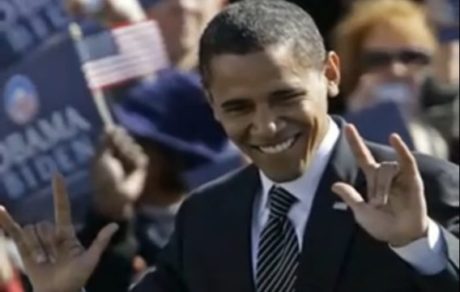 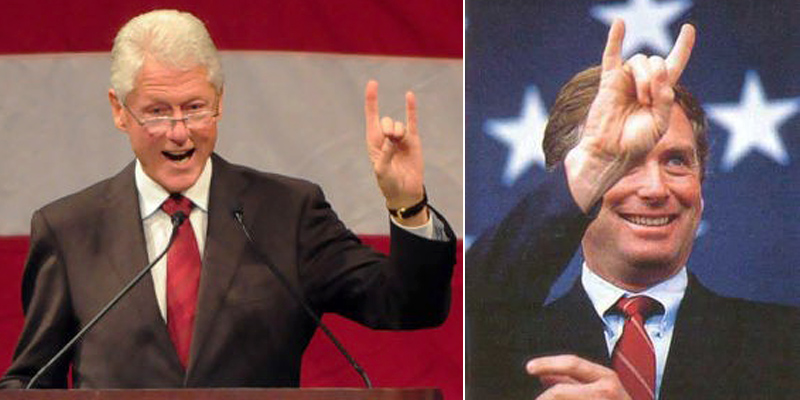 No devil's horns found for Kamala Harris, but

Read in article I now can't find that Soros was there, but not listed in published names of elites present. 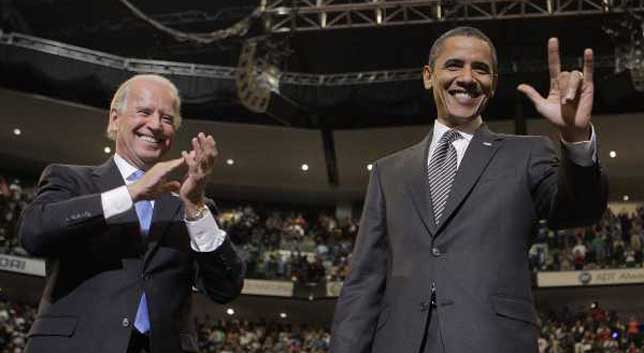 Couldn't find  him doing it, but why is the self-described good Catholic boy Joe Biden smiling broadly and applauding while mere feet away Barack Obama makes the Satanic sign?

Continuing, why is it that ALL of these things listed in the body text were/are true of the Democrats, at least until poll ratings plummeted? This list is from the high level US Military Intelligence group known as Q or QAnon:

Presuming you're still with me and not so shocked you can't follow the rest of the evidence, here are a couple more matters to chew on–big ones. Knowing what we now know, let's go revisit the top line of the logo and see what we can learn, starting with the open/overt meaning.
Democrats (20)20. Arrowhead points right, but the western reading convention is left to right, and we see progress indicated visually as pointing right. And the 0 has CONUS  (Continental US (lower 48)) inside it, so the intended message is “The Democrats will sweep the nation in 2020.”

Now, let's look at a whole different idea. A claim has been made it means Death to America! Thus “D” is shorthand for “Death”, “2” is “to”, and the CONUS graphic is America. Further, the blue arrowhead is aimed straight at the US, which is the bullseye, with the zero forming the target. The result is that the same covert message is being given both alphanumerically and graphically.  This is a textbook demonstration of layers of meaning used in occult communications and teachings. There is an overt meaning and one or more covert meanings, with the covert meanings intended to be limited to initiates.

Now for the other shoe! Would you believe the occult logo message “Death to America!”has now hit the streets of the US?

This led me to an even  more disturbing thought, one that goes way beyond occult communications. What if the logo is a black magic spell? Sounds crazy, or is it?

I'm exhausted, both from a super long stint researching and writing this, plus battling the computer because there's a geomagnetic storm raging and it's far more ill-tempered than the nastiest camel, but I count 17 (in Q circles, that's the numeric shorthand for Q or QAnon) different elements supporting the case the Democratic Party is indeed in the hands of the Satanists. If we take the chance of each element being 50% likely, then the chance of ALL those things being SIMULTANEOUSLY true (presuming I made no math error in keying) is a dazzlingly small 0.00000763–1 in 7.6 million. As Q often asks, after presenting a dizzying array of highly unlikely but true knowns, do you believe in coincidence?

Mike Ock Hertz, Have had this site up since August of 2013 and have had my site hacked many times, been targeted by a government disinformation agent, viciously attacked on Facebook, had a post removed by NSA from Facebook (later returned after exposing what it did), narrowly escaped visits from a painfully outed FEMA and a visit from the Secret Service because the White House Legal Office took umbrage to what I published about the military’s views of then-President Obama. Have also been twice actively considered for Termination with Extreme Prejudice by the CIA, then under Jack Brennan.People who don’t… Read more »