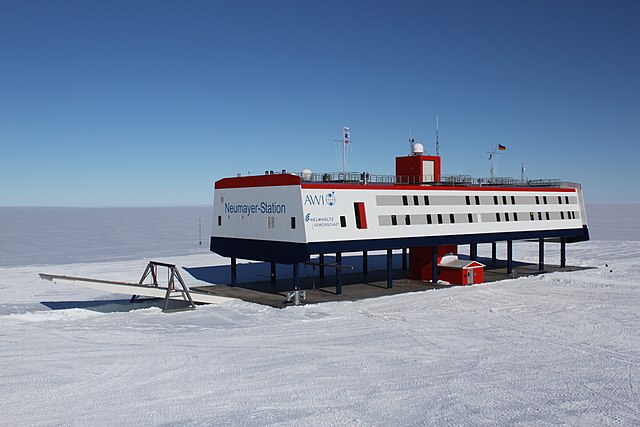 ETs/EDs (Extraterrestrials/ Extradimensionals) of the LF (Liberation Forces) have, via a senior commander, confirmed the tentative conclusions of a Ground Contingent and myself that a video posted to YouTube on May 3, 2013 by jcattera conclusively shows Germany's Neumayer-Station III, Antarctica, imaged one of the new PSS (Planetary Stabilization Ships) over the South Pole. Theoretically, this shouldn't have been possible, since the PSS are in the 4th Dimension, but the dimensional veil has grown thin, allowing this to happen. The LF commander indicated this would be more and more the case in the days ahead. The previously unseen would be seen more and more often. Since this conversation took place via telepathy/intuitive communication, of necessity, some of it took the form of mental images. The image I got of the impact of this information and this spectacular and damning video in particular was of NASA's getting its (lying) metaphorical teeth kicked in. It's hard to hide the existence of ET/EDs when a huge UFO is imaged and the footage posted for the world to see!  But don't take my word for it. Watch the video and note how the ETs/EDs' craft is visible in some frames, but isn't visible in others. This is a kind of dimensional shimmer effect, as the craft moves into and out of our dimension.

Ground Contingent initially felt the UFO was one of the biospheres (huge LF ships designed to care for enormous numbers in the event of a disaster), but positioning favored the PSS explanation. My intuitive sense was that it was a PSS. The conversation with one of the senior military leaders of the ETs/EDs confirmed it was indeed one of the new ships. These were described in my April 21, 2013 post “ETs/EDs Report “Earth Changes Accelerating!”

Don't know about the rest of you, but I'd say this event is Disclosure writ large, a definitive revelation of the existence of a reality the PTW (Powers That Were) have gone to enormous, at times murderous, lengths to suppress and deny. But now, that UFO reality is there, hugely overhead, and there's nothing the so-called authorities can do about it. Already, I've received a report of another huge craft, likely a biosphere, which was seen over California, and I fully expect more and more such reports in the days ahead. Those of you who are skywatchers would do well to familiarize yourselves with the present positions of the planets and the Moon, so if you see something large and luminous (much brighter than any star) elsewhere in the night skies, you'll know it's not either one of those!

These are heady times for those of us who've been slogging, for decades, through a morass of denial, lies, character assassination and worse when it comes to UFOs, ETs/EDs, otherworldly tech and related matters. Vindication has now arrived, but will those unable to cope be able to see what'll be plainly visible to others? Paul Potter, author of the beyond astounding Gravitational Manipulation of Domed Craft: UFO Propulsion Dynamics, 2008, AUP, thinks not, noting on pages 18-19 that when confronted with something for which the mind has no frame of reference, it essentially goes Tilt! The information winds up filed, with no associative retrieval tab, somewhere in memory.

This is much the same thing that happens in the event of a major trauma, wherein the experiencer may have huge memory gaps regarding that horrible event or events. What Paul Potter's talking about, though, is more akin to perceptual blindness. Some simply can't deal with anything beyond the accepted Standard Model of Reality, and rest assured, there're plenty out there happy to reinforce that carefully cultivated, lifelong cultural conditioning. A willingness to cultivate a more open mind, life's vicissitudes, passage of time, even hypnosis can progressively access the otherwise unretrievable experience, but there's precious little time left for those wedded to the Standard Model. Their game clock has all but run out, and there's no overtime!

It'll be fascinating to watch the architecture of misinformation, disinformation, lies and outright brutality to hide the truth of UFOs from us collapse as the days rapidly unfold before us. As they first started saying in the days of radio, “Stay tuned!”

You asked me to go deep and this is what I came up with. The stabilization ship counter balances the affects of the moon forces when the moon and other planets are alligned and energies intensify. This ship allows the Earth to expand gradually while these forces are pulling especially Saturn. It is alligning.

Seems reasonable to me.