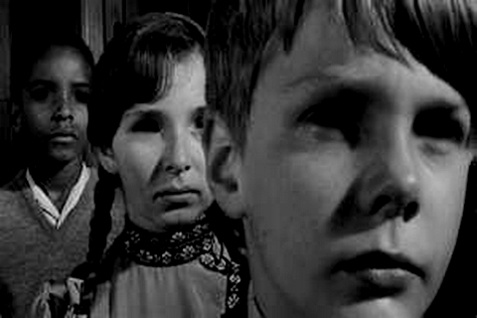 BEK! Don't invite in these strangers!!! Image Credit: Added to the Wikia by TheCipher

In JKI Updated I reported on the amazing longevity of, and ongoing interest in, BEK (Black-Eyed Kids) Exposed!, which made it, for quite some time, the Number One post here on JKI.  The BEK? A hostile group of ETs/EDs (Extraterrestrials/ Extradimensionals) which looks like us, typically children, but eats our souls and leaves us mere shells! Some people simply vanish! Later, that ghastliness made into a post was supplanted by the terrible and profoundly upsetting URGENT WARNING!!! The latter, at least, concerns actions by mortals against mortals, if we take typical spirituality and metaphysics out of the equation.

Long ago, I learned to trust my gut, and what my gut's telling me is giving me a frisson of terror, albeit not directly mine. I have the harrowing feeling that several things may be going on, possibly simultaneously, and they're what lie behind this BEK explosion.

1) There's some sort of kindling phenomenon going on here, low order virality, if you will. The more people who learn about the high weirdness and dread threat posed by the BEK, the more those who've just learned pass the scary word to their circle.

2) People who've not had a direct experience with BEK either know someone who has, or know someone who knows someone who has and come here seeking answers to the seemingly unanswerable. How urgently this type of BEK post reader needs the info is likely a function of the nature, severity and personal closeness of the person who had the BEK encounter. I'm sure it also hinges on the aftermath. Was it an odd experience, an upsetting one, or was it outright terror? Worse, does that person being reported upon now seem different, not all there, maybe even hollow and a shell of his or her former self? Or did the person simply vanish?

3) The BEK post is incandescent because there's been a major and continuing uptick in direct personal encounters with the BEK, and those who've “seen the elephant” are coming here in relative droves trying, with all their might, to fathom what's happened to them. And you can bet those coming are probably not the ones who thought “How odd a request!” and carried on. No, these would be the ones who felt something on the scale from a real discomfort, a sense of being under threat at the time,  clear up through an electric response: “No way in hell am I letting you in!” Slam, followed by locking the door and shooting the deadbolt!

My intuitive sense, aided by simple straightforward logic, is that this BEK page view explosion is directly connected to severe, and particularly, brutally cold weather in both the usual and unusual locales. If I'm right, and I'm most concerned, what's happening is that the highly opportunistic BEK are using our better selves, our high expressions of all that's good in humankind, to prey on those with loving, innocent hearts, who'd be moved to help those poor kids, shivering out there in the cold.

They were sent to the store to buy milk, there was none to be had, and then the blizzard hit. They were lucky to so much as find their way to any house, because they couldn't see, but they found yours. Whew! Maybe it's a hot teenaged girl by the side of the road whose car broke down and whose phone is dead or the dazed young man who shows up on your front porch banged up and seemingly disoriented because his car skidded out of control and hit a  (fill in the blank). You see where this is going, right?

Numerous cultures and religions have strict rules prescribing how to treat the stranger, and who that stranger might be. Whether deity, angel/ET/ED in disguise or simply a fellow human who deserves to be kindly and lovingly treated as you would be treated, all these form powerful motivators to do the right thing, to follow our consciences. And the BEK know this, look for it and mercilessly exploit it when they find it.

Unless you've done an immense of amount of work, probably with expert coaching, on developing self-awareness, you are meat on the table, body and soul du jour when encountering the BEK–unless you listen to your gut and take immediate action. If you stop and try to analyze the situation, you're done, and it's over. If you have ANY encounter with ANYONE where something feels off, forget waiting for scary, immediately break contact and flee.  Fleeing can be anything from quickly closing and locking your home or car doors to taking to your heels, preferably going to where other people are. The BEK look for the weak, the exposed, the vulnerable. They are the prey of choice. Don't be their meal because you let your heart or brain override your gut!!!

Should you or anyone you know have a BEK encounter, please contact me through my site, either via Comments or through the internal E-mail method given here. Please provide as much detail as you can, indicating what's to remain private, if privacy is needed. I won't reveal names unless I have explicit permission to do so. Any information you have from either relayed or direct experience may prove vital. This is an all too real conspiracy masking a war on all of us, conducted under the most treacherous of circumstances! This shouldn't remain hidden history or hidden truth. People everywhere deserve to know, and the media will NEVER carry this story!!!

Thank you John for sharing the great information that we need to hear and understand to protect ourselves from the BEK and other threats. The Carlos Castenada link you shared in the comments section very eye opening and it shed some light on the Gnostic vs Toltec understanding over the reptilian hive mind set we are currently living under. I find the work of James Bartley on the “End of the Reptilian Overlordship” to be a very clear and direct way of understand the mind control influences that the predators use on us.

How The Da’Shen Saved Me From The Cold

Assisting Astral Healing with the ETs/EDs